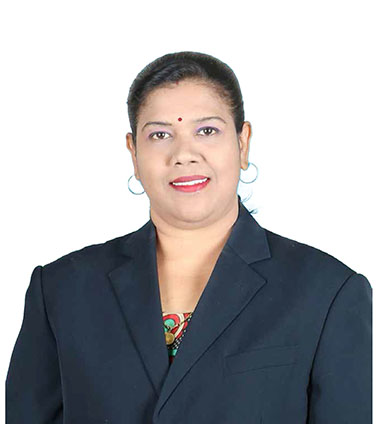 Mrs. Gomathy was born Jasin Malacca. She is the 6th of 8 children. Her father Mr Sankaran was a tractor driver and her mother assisted in the household income as a rubber tapper.

The combined income of her parents was just sufficient to provide for food and some basic necessities. Gomathy’s father had to stop sending her elder siblings to school due to financial constraints. She never attended any tuition class but had very high ambition to be very successful in life. She remembers, the first time she ever wore a shoe was when enrolled for standard one in SJKT Bukit Rengam Johor.

She qualified as a teacher from the Temenggong Ibrahim Teachers Training College in 1996 and went on to obtain her Bachelors Degree in Science in 2009 and her Master in Education in 2013. She is currently pursuing her PhD from Open University Malaysia. As a Science enthusiasts, she enjoys teaching science and has been serving as one since 1997. She is now a Guru Cemerlang (Excellent Teacher) for Science.

She is indeed an excellent teacher as she has been rewarded as excellent teacher in the year 2004, 2008 and 2014. She regularly participates in international science innovation programmer and had won several awards both at National and International levels. Notably she has won 32, 10 National level awards and many state level awards. In 2016 she was honored with the Ramanujam Award ASTI. She also trained and guided her students to participate in National Science Fair for Young Children. Under her able guidance her students have won gold medals both at National and state level. It gives her great pride to see her students under tutelage being given the opportunity to showcase their talent and winning competitions. Besides science awards, as a teacher she was also honored as an Innovative Teacher by the Malaysian Education Ministry. In 2017 she was given the Icon Teacher award by the MIC National President.

Mrs Gomathy’s simply enjoys science and even more joyful when she help in identifying the inherent talents of the young children. It give her great sense of satisfaction as they will one day be very successful.

Mrs Gomathy is happily married to Mr.Poongan and they have two lovely children. She strongly believes in the words of the Late President of India Dr Abdul Kalam, ‘YOU HAVE TO DREAM, BEFORE YOUR DREAMS COME TRUE. Her dream is to see one of her students winning a Nobel Prize and that too the first one!